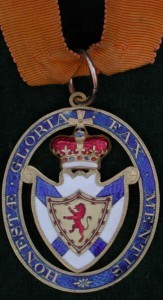 When Charles I erected the Baronetage of Scotland and Nova Scotia in 1625 there was a reluctance amongst suitable persons to purchase the honour, probably because 2000 marks, which was equivalent to £2000 in the money of that time, was considered to be extortionate.

In order to popularise the new Baronetage Charles I gave its members the right to wear the badge of Nova Scotia around the neck suspended by an orange tawny ribbon. It consists of a silver shield with an azure saltire imposed upon it together with an inescutcheon of the Arms of Scotland. There is an Imperial Crown above the inescutcheon and the motto Fax mentis Honestae Gloria encircles the whole badge.

This badge, pictured on the left, continues to be worn by Scottish Nova Scotia baronets to this day. We are indebted to the late Sir John Clerk of Penicuik Bt for this photograph of his badge.

Following the grant of the badge to the Scottish Nova Scotia baronets, the baronets of England and Ireland promptly applied to Charles I for permission to wear a badge but, in spite of many petitions, it was not until 1929 that a badge was granted by a Royal Warrant of George V.

It is pictured to the right and consists of the Arms of Ulster on a silver field, a left hand gules surmounted by an Imperial Crown enclosed in an oval border and embossed with scroll work, varied so that there are roses for baronets of England (left), shamrocks for baronets of Ireland (right), roses and thistles for baronets of Great Britain (bottom) and roses, thistles and shamrocks combined for baronets of the United Kingdom (top). It is to be suspended from a 16mm (5/8ths in.) orange riband with a narrow edge of dark blue on both sides.

The baronets’ badge takes precedence over all Orders worn around the neck with the exception of the Order of Merit. It is not worn in miniature and the riband is not worn in Undress Uniform. The badge may be worn by baronets in uniform as prescribed in dress regulations and in evening dress or with dinner jackets when it is worn close under the shirt collar with the top of the badge’s suspension ring at 25mm (1 in.)  below the knot of the tie. See also : Wearing of Badges

The background to the manufacture of a baronet’s badge is at:  A Badge For a Baronet _ The Royal Mint Blog

An interesting historical note on the Red Hand of Ulster found by Sir David Roche Bt can be found here.

Join the SCB as a Full or Associate member

Standing Council of the Baronetage

Supporting the interests and dignities of Baronets since 1898